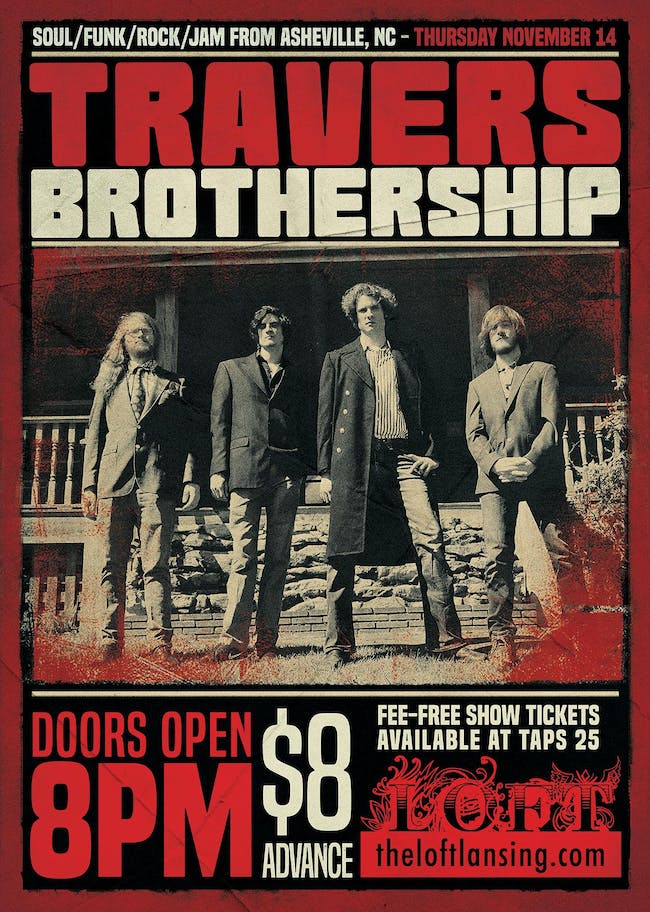 Creature Of One, Two-Body Problem

“Travers Brothership, is an amazing band and is captivating audiences across the United States.” – Relix Magazine (2017)

Songwriters. Singers. Multi-instrumentalists. Brothers. At only 26, twins Eric Travers and Kyle Travers have been writing songs and stunning live audiences for well over half their lifetime. Presenting soulful, bluesy, rock n’ roll spun in psychedelic jam, Travers Brothership; also including singer/bassist/songwriter, Josh Clark, and keyboardist/songwriter/percussionist, Ian McIsaac, create a fierce and balanced team, strengthened by the 13 years they’ve spent together on and off the road.

The band first met in 2007 on a school bus in the Blue Ridge Mountains of Western North Carolina. Soon after the Travers twins were invited by Josh and Ian to get off at their bus stop for a jam in Josh’s garage, little did they know this was history in the making. After numerous jams and a few lessons from Eric and Kyle’s father (and veteran touring musician) “Hurricane” Bob Travers, Travers Brothership was formed in 2012.

With over 400+ shows across the United States and Europe under their belts, the band has become a well oiled machine, performing alongside acts such as; Gov’t Mule, Taj Mahal, J.J. Grey & Mofro, Moe., Kyle Hollingsworth Band, Blues Traveler, Charles Bradley, Leftover Salmon,The Marcus King Band, Dr. John, and many more.

Travers Brothership are consummate musicians and live music aficionados with a deep understanding of their preferred genres. Utilizing the band's unmatched live energy, they create a concert atmosphere that transforms an audience into a community and their enthusiasm, gusto, and talents carry the day. In 2018 Travers Brothership brought their instrumental prowess and tasteful songwriting to Echo Mountain Recording Studios and The Eagle Room in their hometown of Asheville, NC. The result, “Let The World Decide” adds to their already abundant catalogue, and sets a new bar for the band musically.

“Travers Brothership ripped into seemingly every stage at FloydFest, with guitarist Kyle Travers displaying raw talent and six-string exploration in equal measure. Alongside his twin brother, drummer Eric Travers, the siblings and their two childhood friends revealed a mature sense of self.” – Rolling Stone (2019)